Have you got concerns about programming palletizing robots? A few programming myths can stop good people from getting the most from robotics. When you’re aware of these myths, you can be better informed and avoid making mistakes.

People sometimes have bad feelings and uncertainty about robotics. The most obvious of these fears is that workers might lose their jobs directly to robots. However, even when you know that this is highly unlikely, you might still be uncertain about adding a palletizing robot to your operations.

But, the fact is that palletizing is often much better done by a robot. When you realize that the common programming myths are untrue, you can start to embrace robotic palletizing.

Don’t believe all the programming myths you hear

It can be hard to get clear information about robot programming.

You just want to know whether programming a palletizing robot will be easy enough for you to do yourself, or if it is far outside your skillset. So you search for information online and you ask people for their opinions.

On the other side, you have companies like us. We tell you that robots are easy to program (and they are!). But, you might wonder, how easy is “easy?” Do we just say that robot programming is easy because we are already highly-experienced roboticists?

It’s worth being skeptical of both opinions.

The best way to tell for sure if you will be able to program your own palletizing robot is to try it for yourself.

Get your hands on a palletizing robot and try creating your own program. This is a surefire way to find out if robot programming is really as easy as we say it is!

There are various programming myths about robotics. Maybe you have heard someone saying these out loud. More likely, you might just “get a feeling” that they are true because of your general perceptions of robotics.

Here are 3 harmful programming myths that will affect your perception of palletizing robotics:

Myth 1: You need to be a robotics expert to program robots

There was a time in the not-too-distant past when robot programming was a specialist skillset. It required extensive experience and knowledge.

These days are gone. If you want to add a palletizing robot, you probably have the skills and technical know-how to learn how to program that robot.

If you can operate a smartphone, you can program a collaborative robot. There were 6.37 billion smartphones worldwide in 2021 and 91.54% of the world population own mobile phones. That’s to say… you almost certainly already have the basic skills you need to operate and program a palletizing robot.

Myth 2: You only need to “learn robot programming” and you’re done

A common misconception among new robot users is that “robot programming” is a single skill. Some people think that they can just send people on a single robot programming training course and that’s all they need.

In reality, there is no single “robot programming skill” that works for every robot and every company.

It’s much more useful to learn the skills needed to deploy any robot in any situation. This includes skills like problem-solving, judgment, and systems thinking. When you develop these skills, you will be able to deploy robots for a whole range of applications.

A common mistake that companies make when considering robotic palletizing is thinking that deployment will “take too long.” They say “We can’t afford to invest in robotics training right now. We’ll add a robot when we have the time and spare resources to do it.”

This mindset is often very counterproductive. Yes, it takes a little time to deploy a palletizing robot. However, with the right palletizing solution, deployment can take a matter of hours or days. This is vastly shorter than the amount of time you save by using the robot instead of palletizing manually.

Training is also much easier, cheaper, and quicker than most people realize. With our free palletizing eLearning course, you can learn how to set up and program a palletizing robot extremely quickly. 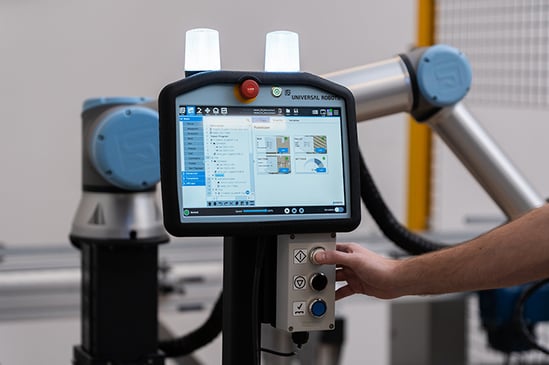 Where myths about coding robots come from

Why do such programming myths exist?

Partly, robot programming myths come from an outdated understanding of what it takes to learn to program. They come from a general perception that “programming is hard.”

The thing is… learning to program used to be hard!

These days, thankfully, programming is much easier to learn. Programming interfaces are easier, training is more accessible, and robotic technology is much more reliable.

If you are starting your robot programming journey right now, you benefit from all that advancement.

A better way to approach robot programming for palletizing

How do you get started programming your palletizing robot?

A good rule of thumb is to start with your knowledge of your manual palletizing task. Don’t worry too much about the robot in the beginning. When you understand your manual task clearly, it will be much easier for you to program the robot.

And check out our free eLearning course to see how easy it can be to program a palletizing robot.

What myths about robot programming have you heard? Tell us in the comments below or join the discussion on LinkedIn, Twitter, Facebook, or the DoF professional robotics community.