On of the unexpected consequences of this prolonged lockdown was the cancellation of all motorsport events. Large gatherings of people are now taboo subjects and that means teams that used to compete in racing events are forced to find new ways to keep themselves in shape. For BMW, the Motorsport simulator in Munich is proving […]


On of the unexpected consequences of this prolonged lockdown was the cancellation of all motorsport events. Large gatherings of people are now taboo subjects and that means teams that used to compete in racing events are forced to find new ways to keep themselves in shape. For BMW, the Motorsport simulator in Munich is proving paramount right now, as drivers get to practice indoors, without risking spreading harmful germs.

It’s quite an awesome machine too, unique in the world, and with a price tag that has 7 digits. “The BMW Motorsport simulator is a very important and useful tool for us in training the drivers, preparing our race appearances in terms of car set-up and energy management, and last but not least, also in car development,” said Rudolf Dittrich, General Manager BMW Motorsport Vehicle Development.

“The unique configuration of the hardware, continuous detailing of the software and modelling, the very close correlation with real data and the high computer performance make even the smallest changes in vehicle set-up or the development of new cars noticeable and comparable. The compatibility with other BMW Group simulators brings about many synergies and a continuous transfer of technology and knowledge between motorsport and production development,” added the GM of BMW Motorsport Vehicle Development.

At the core of the BMW Motorsport simulator is a detailed car model. Its basis is identical for all BMW simulators in development. The feedback relevant to the driver is determined from the model for a globally unique configuration with linear actuators and a turntable, and transmitted with high precision and minimum delay. For this, the system relies on processing power of 100 teraflops of data. This means that 100 billion calculations are possible every second. Three projectors display the racetrack for drivers in the simulator.

Great value is placed on a high quality of immersion into the virtual world. If the immersion is not good enough, driving in the simulator can trigger headaches and nausea similar to motion sickness. This has not been the case for racing drivers to date. The necessary foundations in this area are undergoing scientific research in several research projects in parallel. The findings are also available to other areas within the BMW Group, which, for example, are involved in the development of autonomous driving.

Currently, the BMW Motorsport simulator can visualize the BMW M4 DTM and the BMW iFE.20. It is possible to switch between these two cars within the space of an hour. The following track configurations are available: Nürburgring including the Nordschleife, Hockenheimring, Norisring, Lausitzring, Assen, Jerez de la Frontera, Brands Hatch and the future DTM venues Anderstorp) and Monza. 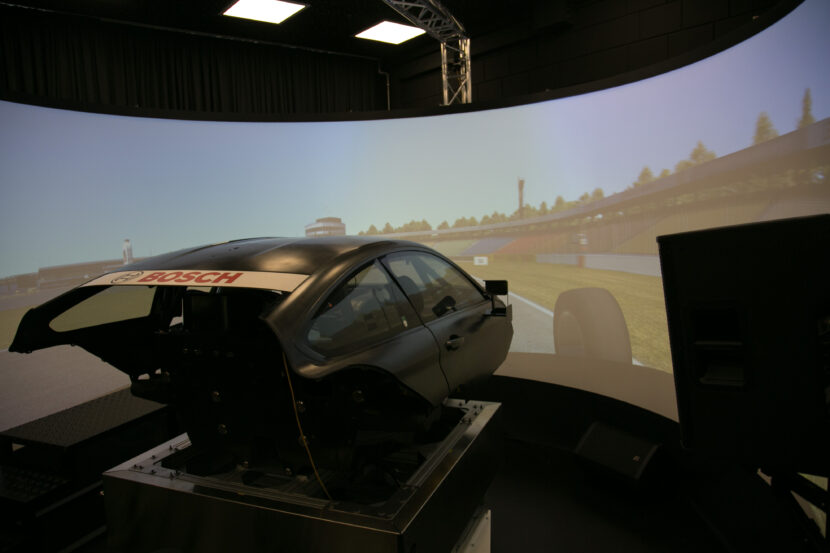 Also available are all the tracks from the 2018/19 and 2019/20 seasons of the ABB FIA Formula E Championship, and the BMW test site in Miramas modeled in collaboration with production colleagues. Changes to existing tracks or the implementation of new venues can be made in less than a week, as required. A total of 19 racing drivers have already taken the wheel of the simulator; in addition to BMW works drivers from the DTM and the ABB FIA Formula E Championship in 2019 and 2020, this also includes new drivers ahead of their rookie tests.