Multiple iPhone users running the first developer beta of iOS 14 are reporting that they are now seeing their YouTube video resolution going all the way up to 2160p or 4K. YouTube resolution has been limited to all iOS and iPadOS devices due to a codec compatibility issue. YouTube encodes its videos in two codecs, […]


Multiple iPhone users running the first developer beta of iOS 14 are reporting that they are now seeing their YouTube video resolution going all the way up to 2160p or 4K.

YouTube resolution has been limited to all iOS and iPadOS devices due to a codec compatibility issue. YouTube encodes its videos in two codecs, AVC1 (h.264) or Google’s own VP9. However, while VP9 encoded videos are available in all resolutions and frame rate options, AVC1 encoded videos are only available up to 1080p60 resolution.

Apple had previously refused to support Google’s VP9 codec on all of its devices, which is why all of Apple’s devices, including Safari on Mac and the Apple TV, are limited to only 1080p resolution videos on YouTube. On the Mac, you can bypass this by using another browser like Chrome or Firefox but that’s not an option on iOS, iPadOS and tvOS devices.

However, according to the screenshots posted by users who are seeing the 2160p option on their iPhones, the devices are now decoding the VP9 codec just fine all the way up to 2160p at 60fps with HDR. We are not 100% sure yet if Apple is decoding this codec on a GPU level or in software on the CPU.

Apple recently officially announced that 4K HDR support is coming to YouTube on the Apple TV 4K in the next major tvOS update releasing alongside iOS 14. However, the company made no claims about supporting the higher resolutions afforded by the VP9 codec on its mobile devices or even the Mac, for that matter.

It seems with the developer beta Apple maybe testing the waters. Or it could be something that Google is experimenting with. But with no official announcement from Apple, there’s no guarantee that this feature will end up in the final release of iOS 14 this fall. There’s also the issue where only a select iPhone models seem to have received this feature, notably those with OLED displays. And from what we have seen so far, none of the iPad users have gotten this feature. 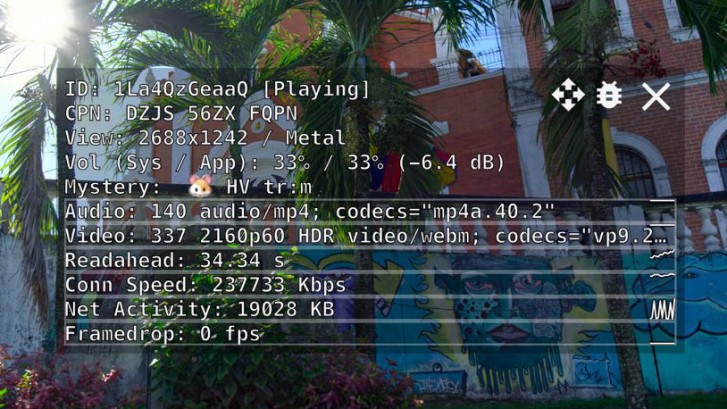 In case you are wondering why one would even want 2160p option on mobile devices, the answer lies in the encoding. YouTube encodes different resolution options with various levels of compression. Videos below 1440p (so 1080p down to 144p) have a much more severe compression ratio than videos including and above 1440p. Even if you have only a 1080p display, watching YouTube in 1440p or 2160p nets a massive improvement in bitrate and image quality as a result. Motion is clearer and there is significantly less macro blocking and artifacting.

Moreover, AVC1 videos are also compressed differently than VP9. VP9 is a more efficient codec so it has more data for the same bit rate, which is why VP9 version of the same YouTube video at the same resolution looks better than the AVC1 video if you have a good display and know what you’re looking for.

Android devices have had VP9 decoding ability for a while now so almost all Android devices on the market already benefit from YouTube’s superior encoding in all resolutions. But if this change goes through to the final version of iOS 14, then even iOS users will have access to the same high quality video as Android users. Hopefully, Apple does manage to get this in and also enables it on the iPad and the Mac.