Introduction Samsung announced two new tablets alongside the Galaxy Note20 series – the Galaxy Tab S7 and Tab S7+. They both come with the new S-Pen and a pair of wonderful 120Hz displays, while the most recent Snapdragon 865+ chip and wireless DeX support may as well seal the deal for many. Today, we are […]

Samsung announced two new tablets alongside the Galaxy Note20 series – the Galaxy Tab S7 and Tab S7+. They both come with the new S-Pen and a pair of wonderful 120Hz displays, while the most recent Snapdragon 865+ chip and wireless DeX support may as well seal the deal for many. Today, we are welcoming the larger slate of the duo – the Galaxy Tab S7+ with its 12.4″ Super AMOLED screen and low-latency S-Pen.

The Android tablet market has been rapidly shrinking throughout that last couple of years and Apple’ determination is the reason. The Cupertino company has been relentlessly expanding its tablet lineup and improving its software ecosystem, and it has paid off – Apple has been rightfully crowned as tablet king. Samsung is among the few Android makers that methodically try to challenge Apple’s rule and well, this time around, they might as well put a dent in it with the new Galaxy Tab S7+.

What’s so special about the Galaxy Tab S7+ then? Well, it is probably the first Android tablet to trump the iPad. It has one of a kind high-res AMOLED screen with 120Hz refresh and HDR10+. It also supports S Pen and the active stylus comes bundled. The new Tab also features the latest Snapdragon chip, with optional 5G modem, and has one very large battery.

Outside the hardware technicalities, the new Tab S7+ has been heavily optimized for both tablet and desktop experience. It features the new One UI 2.5, which is basically an enlarged smartphone UI. But it can also go into DeX mode and look and work like a desktop device with multiple apps, windows, and whatnot. Samsung has also partnered with Microsoft for unmatched Office experience, future-proof xCloud gaming ready via the Xbox Game Pass, and added support to be a secondary screen to your Windows PC.

Then there is the new low-latency S-Pen, which enriches this experience, both tablet and desktop, with true-to-life handwriting and sketching, making it so easy to write, draw or mark over pretty much anything. Samsung’s Notes app is truly amazing, but the company will also grant you access to a couple of premium app and services for sketches and drawings to get you started. Plus, with the new Air Actions and wireless DeX support, presentations have never been easier.

Finally, the Galaxy Tab S7+ also impresses with the rest of its essential features like a nice dual-camera on the back with Night Mode, four AKG speakers, and under-screen fingerprint scanner.

It seems this Tab S7+ is lacking nothing and prepared for everything. Samsung is also readying a nice lineup of original accessories such as Book Cover, Keyboard Cover, Galaxy Buds Live, and more, so the future seems bright.

Enough with the introductions though, let’s unbox this table and see what comes out.

The Galaxy Tab S7+ comes in a rather thin but large paper box and it hides no surprises. Inside you’ll find a 15W charger, a USB cable, and an S-Pen. 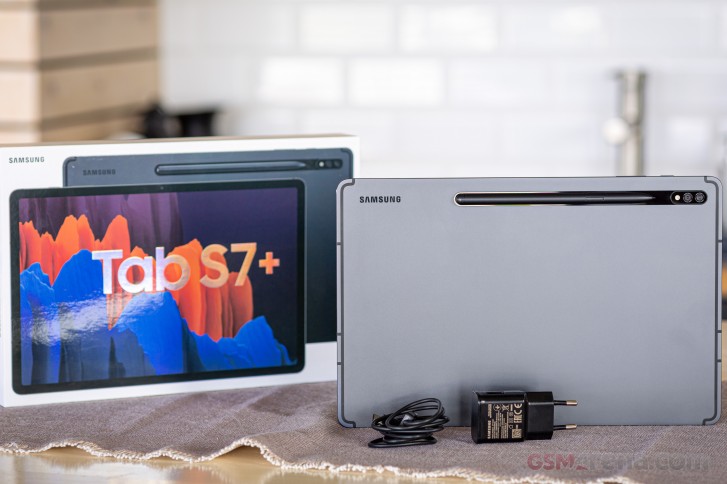 Samsung’s official website says that some markets won’t get the S-Pen bundled, meanwhile, there will be others that’ll receive a pair of in-ear headphones as part of the retail package in addition to what we got.

The Tab S7+ supports 45W charging, just like the Galaxy S20 Ultra. And just like the Ultra, the tablet is bundled with an inferior adapter, way inferior at that. You can, of course, buy it separately for about €50.

Follow us on the next page as we check out the tablet itself.