Let the visual battle commence, as the current generation BMW 7 Series prepares to battle its traditional rival: the new Mercedes-Benz S-Class generation. We expect lots of comparison tests and benchmarking trials between the BMW 7 Series and the latest Mercedes-Benz S-Class model that premiered today during. The long-term competition between the 7 Series and S-Class is not just a vanity fight, but essentially a deep rivalry in aspects of business model, brand philosophy, clientele, technology and, nonetheless, styling.

The differences in design are striking, but also help individualize both luxury models according to brand prerequisites. As already known, the BMW 7 Series has always showcased a powerful, dynamic elegance whilst the Mercedes-Benz S-Class has been the adept of a more classic philosophy with respect to styling. In the end, it is purely a matter of personal taste and brand affinity to choose a favorite out of the two.

To begin with, it is sensible to say that both luxury models are proud flagships of their mother brands, setting the pace and giving a strong signal within their respective families. They are both fantastic cars, in essence, so comparing such different brand identities is more or less relevant. But, for the sake of exterior and interior design, let’s see how the two rivals stands against each other. 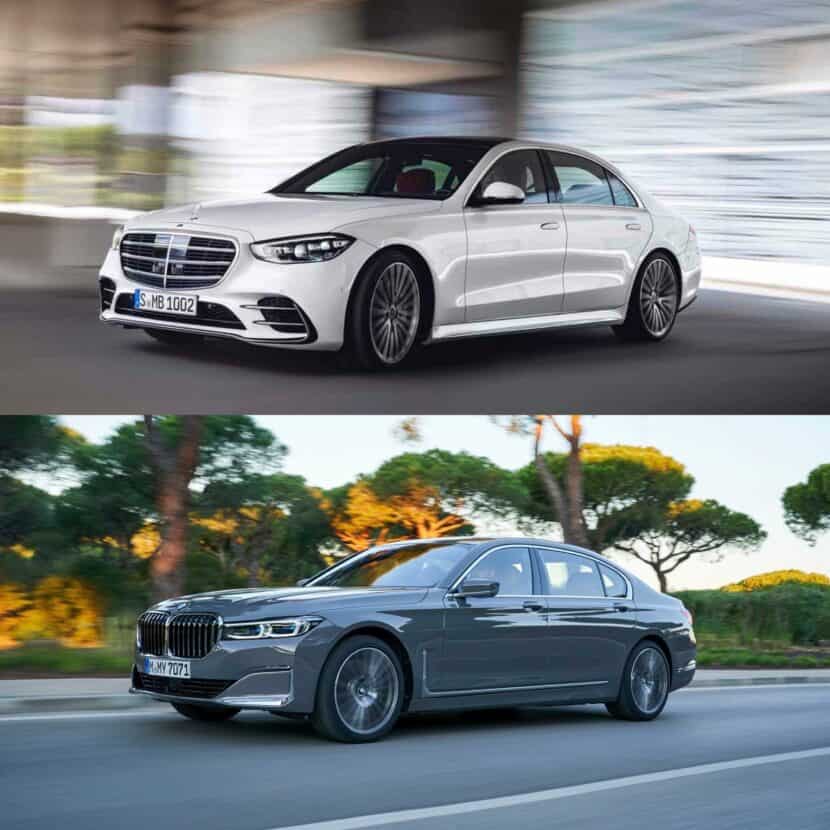 Starting with the front section, we have to agree that both models display a strong, self-assured attitude. BMW took note of initial complaints on the G11/G12, so the LCI 7 Series now showcases a striking fascia with streamlined headlights and a big, signature kidney grille.

In the case of the S-Class, the recipe is similar although applied on the carmaker’s Sensual Purity design philosophy. The DIGITAL LIGHT technology has allowed for the new S-Class to get slimmer headlights. As well, the well-known iconic chrome grille got bigger compared to the W 222 generation.

Of course, the grille on the 7 Series looks a bit more imposing, in addition to the more aggressively-styled, pointed headlights that connect to the kidneys. The headlamp signature with tridimensional LED filaments is another instantly recognizable element in the case of the G11/G12. In the case of the S-Class, the former three-torch light graphics seem to have been lost given the new DIGITAL LIGHT technology. In any way, the eyes of the new S-Class display a softer appearance, yet it still manages to look high-tech.

The amount of chrome adorning the front fascia is relative to each brand, but it seems that both the 7 Series and the new S-Class boast a good deal of the material, which further renders them the needed upscale, premium image. In terms of detailing in standard and M Sport/AMG Line trim levels, the two contenders look equally attractive, of course in line with the brand philosophy.

Yes, the S-Class looks better and poised in the muscular AMG Line, while the 7 Series is more multivalent and appears majestic and dynamic in both standard and M Sport trims. 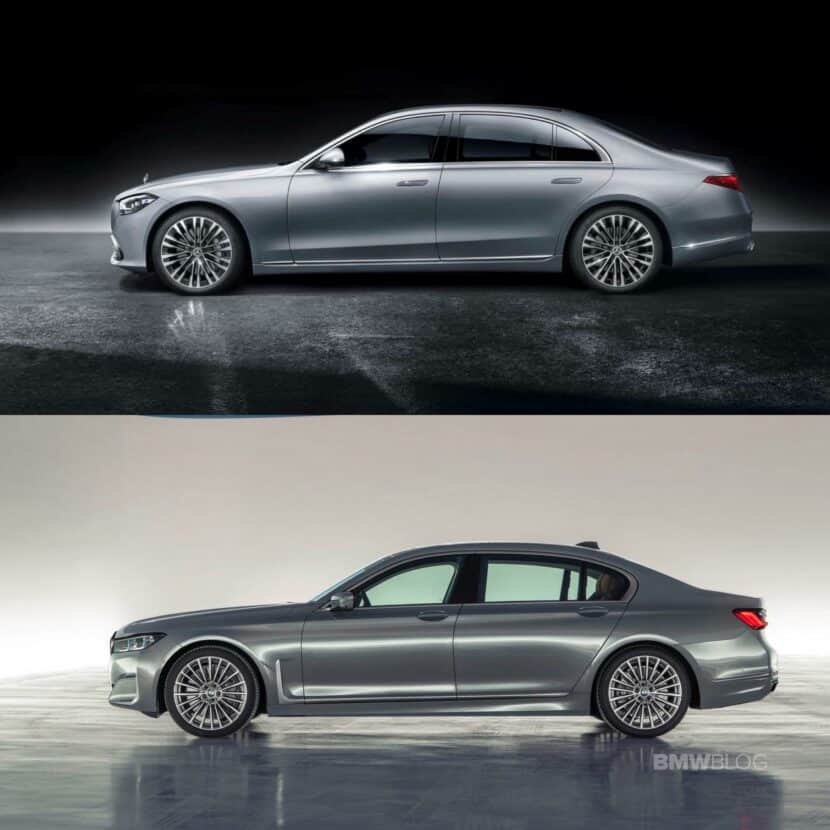 The side profile reveals again two different philosophies. The 7 Series boasts a strong silhouette, with the present Hofmeister kink as traditional, influential design element and an unparalleled level of sophistication and surfacing. The hockey design element adds further presence to the G11/G12 and accentuates the sophistication. While looking decently harmonious, the S-Class can’t get rid of the swoopy roofline and the typical egg-like shape, which make the car look rather uninspiring.

The window lines is, as expected, curved and following the roofline. The day is saved by a new character line along the waist of the new S-Class, which luckily manages to add more character to the car. But, in the end, the 7 Series qualifies as the more confidently styled car, with typical, dynamic RWD proportions and its massive rear shoulders. 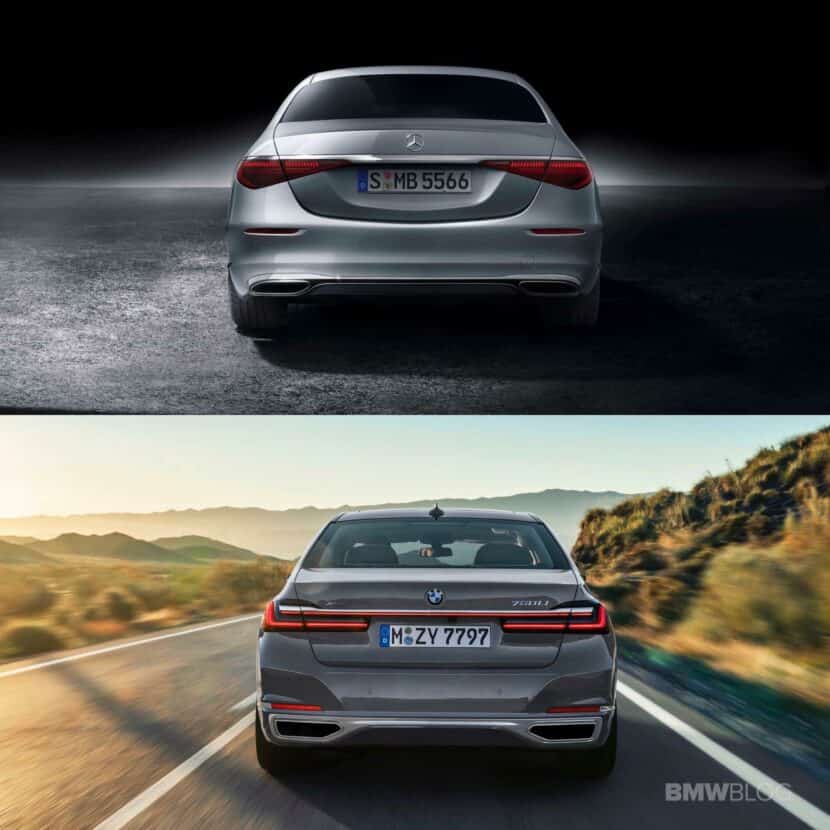 At the rear, those triangular lights don’t do justice to the S-Class. The back-end is rather bland and uninspiring in terms of styling for the Stuttgart-based flagship. The 7 Series looks again to be the better sorted out. Even though we are talking a design that is already several years old. The aging and LCI process have done wonders to the 7 Series. Relying on hallmark design elements like the L-shaped tail lamps, this helps the Bavarian display a natural of luxury and superiority compared to the new S-Class.

I wouldn’t call it a draw just for the sake of objectivity, as it all comes down to personal choices in the end. For me, in terms of exterior styling, the 7 Series is the winner here, even though the W 223 S-Class is the newest contender in the luxury business. 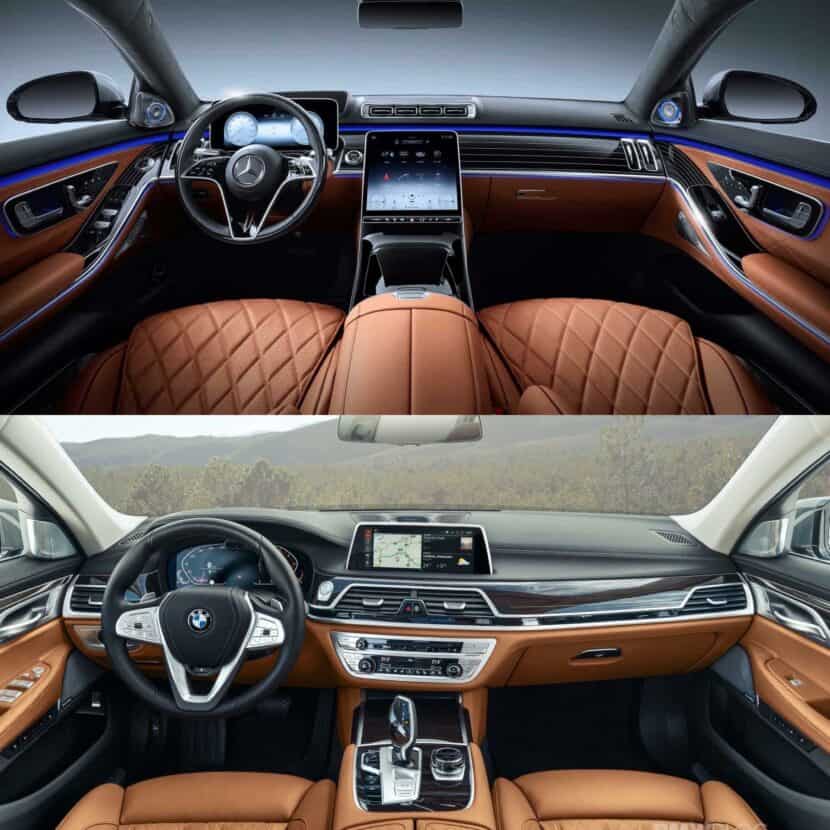 Going inside, we are faced with two opposite worlds. On one hand, the 7 Series displays a classic opulence with a well-dosed use of digital equipment, with a more natural integration of technology. The 7 Series remains the exponent of a bygone era, when digital was not the keyword in the business.

On the other hand, the new S-Class is simply delivering the latest digital technology in your face. I, for know, will need some time to get accustomed to the radically revised interior and dashboard of the W 223. It is, in many aspects, a pioneering effort from Mercedes-Benz.

Technology-wise, the S-Class seems to become the new benchmark in the segment. But I would have appreciated a better integration of the big central tablet of the MBUX system, as well some more refined air vents. And the new generation of multifunctional steering wheel looks a bit odd, as well.

In some aspects, the S-Class appears to have used the 7 Series as inspiration, as many details inside the cabin resemble the style of the ones in the G11/G12. The big slab of of wood, that harmoniously continues on the front door covers, is another highlight of the new S-Class cabin.

Other than that, the S-Class feels elegant, but falls short of being essentially special. I know, the big screens might mouth-watering, but in the luxury class I still feel there’s a need to balance in technology with style, like the 7 Series does.

In the end, it’s a narrow-miss for the S-Class in the looks department, with the 7 Series remaining the leader, at least in my view. So, what’s your pick in this contest?