Introduction The Oppo Watch is a premium looking smartwatch that sticks out amidst the growing wearable crowd and might just be the closest a non-Apple product has come to Apple Watch’s levels of refinement and premium nature to date. The Apple Watch is a hugely influential landmark device for the entire wearable niche. According to […]

The Oppo Watch is a premium looking smartwatch that sticks out amidst the growing wearable crowd and might just be the closest a non-Apple product has come to Apple Watch’s levels of refinement and premium nature to date.

The Apple Watch is a hugely influential landmark device for the entire wearable niche. According to some sources, Cupertino’s wearable line has shipped so many units that it is not only the most popular smartwatch on the market, but it is the most popular singular watch model. As in, wearable timepiece, in general.

We are not saying that the Oppo Watch can ever rival the Apple Watch in popularity. We are not even saying that it is equally good as a product. But it’s as close as an Android smartwatch has gotten to Apple’s wearable. And it’s by no coincidence. Oppo has clearly targeted anyone who may be tempted by the Apple wacth by creating a device with the same overall design.

There is an obvious visual similarity between the Apple watch and the Oppo Watch. Sure, you could say that the Oppo Watch takes after the traditional, rectangular wrist watch form factor but anyone can do their own comparisons.

At the end of the day, it’s the kind of argument best left to legal teams to quarrel over. The important and exciting bit us consumers should focus on is that we have a shiny new Wear OS smartwatch to enjoy. A standout device, occupying what is a shrinking niche of Google-powered wearables. One that not only looks and feels the part, but also has a major secret weapon in its arsenal – a whole second chipset and OS, to power an extremely efficient alternate, battery-saving mode of operation. One that Oppo claims can squeeze up to 21 days of operation from a single battery charge, while still delivering a core set of smart features – notification, heart rate monitoring, and step counting.

That’s one hell of a party trick. Attempted before in the wearable realm, but never at quite this level. If everything works well and as promised, the Oppo Watch could deliver the flexibility of a true smartwatch, with the endurance of a smart wearable/fitness tracker. The best of both worlds. Quite a tall order to fill. Join us on the following pages to see whether the Oppo Watch truly gets to keep its cake and eat it too. But before that, let’s see the box first.

The Oppo Watch offers a premium experience from the get-go arriving in a high-quality product box. It is a two-piece design, made from thick cardboard and complete with a soft, rubbery finish and embossed graphics and text. On the inside, you get secure plastic cradles, holding everything in place. 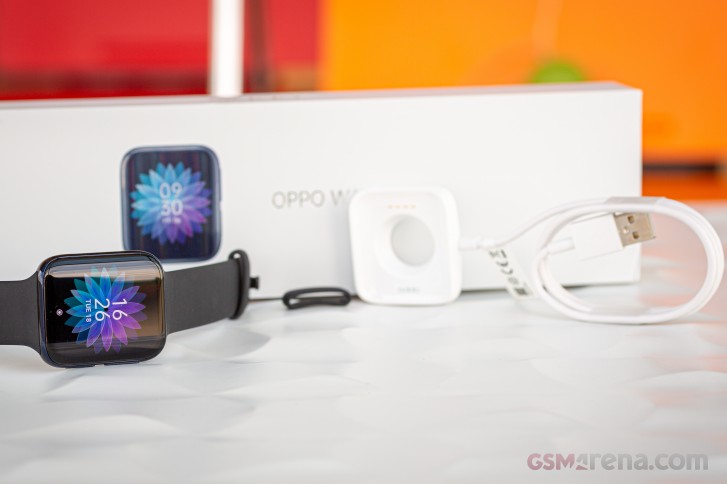 Surprisingly, though, not a lot in terms of accessories. There are no extra bands. Just a single spare ring for keeping the band tucked-in. The charger for the Oppo Watch uses a magnetic cradle design, with a fairly long and thick USB-A cable. It is rated for [email protected] – nothing too fancy, but still a bit of extra current than the standard USB 500 mAh. Since charging is actually done via pogo pins, instead of wirelessly, the Oppo Watch hardly wastes any of this juice.

previousGoogle services down for users around the world